CWCOM is an easy to use program,  although there are no "rules & regulations" stipulated, a common sense approach to "working procedures" works reasonably well.

In general, the procedure followed by existing operators, is very similar to that of Amateur Radio operations,..  using the same Q codes and "overs" system....  however, a few points need to be explained to make things work smoothly "on channel".

Unlike the HF radio frequencies. there is no fading, (QSB)... there is no low power section ( QRP ). and the only mode of operation is CW or Morse. with a modification that you can also TYPE your QSO, which is then sent across the internet in Morse to the receiving station. Because of this, it is pointless sending some kind of signal report,... such as  599 or 5nn... everything on cwcom is 100 percent 599 due to the nature of the internet.. !

Channel 1000 is the Primary or DEFAULT channel,.. and can be considered as the CALLING FREQUENCY.... (but can be used for chat if no other stations are showing on the "on channel" window)  once a QSO has been started, it is "common sense" to QSY or "shift"to another channel,... Especially if there are other stations showing on the "on channel" window....this is easily done.. no re-tuning of antenna !... just announce the new channel..."QSY 999" or whatever channel you want... the other station will probably agree,.. and you can both  send   Dit Dit,..or "UP"... and then click on the up or down arrow on the channel window at the bottom of the text screen...

How to QSY on cwcom ?

the channel number at the bottom of the screen is the channel "in use"... to qsy use the "up" or "down" arrows to the right of the number and that will qsy you.... the other station will have to do the same... ! .

This will then leave the "Default" or calling channel free for newer stations to be able to establish their own qso.

Using the "WebView" icon   this gives a new page called IONOSPHERE Current users list of channels .  ((The "monitor screen icon" at the top of the text screen)), you can find out what channels other stations are working on.

In the past few years, channel 1000 has become the "general chat channel".. because there has not been many users... and it seemed to be a bit pointless to QSY,.. in other words, it has become "habit" to continue qso`s... The  problem with this, is,    that if a number of other stations start CWCOM they will also, by default, be on channel 1000, and because a QSO is in progress, will, "hopefully" politely wait for  ........


It is therefore a good idea to re-size the main screen, so that the "On Channel" window, can be positioned below the main screen.. and when new user start up...they will be shown on that screen, and hopefully, those in the QSO, will call them, or arrange a QSY  to free up 1000 again. 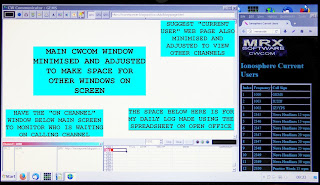 Sometimes... a "collision" is unintentional, due to new users not knowing how cwcom actually works,.. other times it is deliberate, due to frustration of waiting, and being ignored.

If everyone uses the "On Channel" window as described above, then it is possible to pass a message to other stations using the "message box" at the top of the screen, to the right of the QRX box.

Messages here, are displayed alongside the callsign on the "On Channel" window... therefore, it would be possible to ask another station ( not involved in the existing QSO) to QSY to 1001 and start a new QSO, without interrupting the existing one...

NOTE>.. To remove messages ... delete by backspacing, or highlighting and backspace, then press SPACE BAR and then RETURN key... this.. in effect . puts  a  new message       ( the space ) on the message box.

A word about typing.... Some stations have removed all the CAPITAL LETTERS from their Morse Library ( tutorial  Editing the morse library... Page 12 of this blog )..  this means that whatever is typed in capital letters, does not have the morse sound when received.   Also.. when you type.. ( as an "over" )  you will not hear the sound of your typing in morse code.

As is common practice, it is "good manners" to use "lower case" when typing, as this is "not shouting".. although it is only an advisory matter. Some Australian  Post Office Telegraphists of the Landline era, still like to see the text in Upper Case, as that is what they used on their typewriters.

Also when typing... you should still follow the conventions of the HF Amateur Radio operations, and "be nice to each other"  ! ! !

most importantly... end your "typed over" with the letter K or AR as you would if sending morse.. to let the distant station know you have finished typing.!!

MorseMan
I am 71 yrs old and retired.. I am Ex-Royal Navy Leading Radio Operator (G). The last time I used Morse on a live circuit on the air, was in 1968.... until I found CWCOM about 4 years ago, since then, my rusty morse has improved greatly using it every day, to make contact with over 500 ops world wide on cwcom.